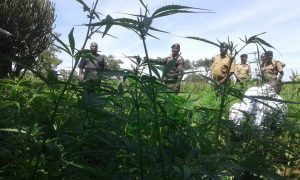 Migori police have contacted their Tanzania counterpart to arrest suspects who fled across the border after a bhang farm worth Sh15million was found in Buembu village, Suna West.

On Thursday, police uprooted 1.5 acres bhang farm in border with Tanzania after acting on a tip off from members of the public.

They were led by led by county Administration Police commander Julius Mukanda  after a suspect as arrested as they were found harvesting 20 bags of bhang.

“We found the suspects harvesting and already packaging 20 sacks of bhang ready to be transported,” Mukanda said.

Police uprooted the plants and took them to Migori town police headquarters for destruction.

“We have intelligence reports that bhang smugglers who have planting huge tracks of drugs in Tanzania have shifted to remote villagers along the border in Kenyan side,” Mukanda said.

READ ALSO: 38 millon worth of bhang set on fire in Migori