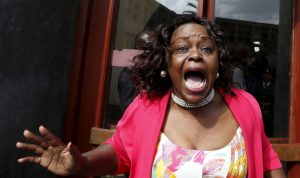 Mabona who has been in Kiev, Ukraine with colleagues for Global Action training said that despite loving Wanga, whom she called a sister she will never support her bid.

“Let me state categorically that I love my sister Hon Gladys Wanga. I support women leadership in general. Gladys would be the worst mistake Homabay would make for choice of Governor,” she posted on Facebook.

She said even though she supports women leadership, she will never support Wanga who she said is “ineffective and exploitative” leader.

She said Wanga as perfomed poorly in NG-Affirmative Action Fund and the ever money-consuming SACCO, which has been her flag ship project.

“Her style of leadership is abbrasive, divisive and manipulative. I hereby declare you do not have my support,” Mabona stated.

She dared Wanga to “unleash all the online warriors in heaven and on earth”, but she will not change her tack.

She said while other leaders in Homa Bay are afraid of Wanga by talking in parables, she will say no in any language available.

Wanga is yet to react and comment on the outburst..