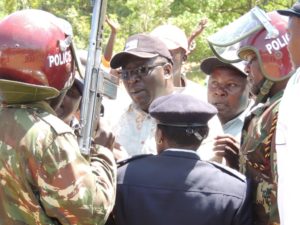 Suna West MP Peter Masara has vowed to ignore Interior CS Fred Matiang’I order to end NASA demos by being in the fore-front from Monday for daily demos.

Masara has been a fixture in anti-IEBC demos in Migori by leading other leaders in Migori Town which is in his constituency.

“We want to tell Matiang’I that he still lives in the past if he thinks he can issue orders on our constitutional rights to picket, from next Monday I will in the streets of Migori town every day until NASA leader Raila Odinga puts a stop on demos,” Masara said.

The legislator thanked Migori county residents for being in the front and turning out in huge numbers for demonstrations.

“Today residents turned up in large numbers and we want to call on more turnout from next Monday to put pressure on free and fair elections,” Masara said.

He added that “Matiang’I should know we will never tire to have a free and fair elections in the country, we don’t want a repeat of bungled polls in the country.”

“We are tired of gun shots, even if you bomb us we will stay put until Chiloba goes home and we are given a free, fair and verifiable elections,” Masara said.

Earlier in the day, Masara led demonstrators in burying Matiang’i and IEBC CEO Ezra Chiloba in a two dummy coffins as a sign of sending them off.

“Chiloba should know that according to the Luo culture if you are buried and your funeral organised while you are still alive then you remain a ghost, a persona-non grata. Any we don’t want any ghost organising election,” Masara said.