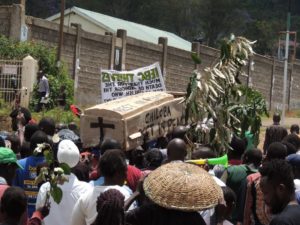 The dog was killed as it followed wailing demonstrators looking forward to a feast.

The public placed the dog on top of the coffins at Migori IEBC offices and performed a funeral service as anti-riot police officers looked on.

They signed condolence book, prayed for peace and cursed the two officials before being addressed by Suna West MP Peter Masara.

“Today Chiloba and Matiang’i are ghosts since according to the Luo culture if you are buried and your funeral organised while you are still alive then you remain a ghost,” Masara said.

He vowed to lead daily anti-IEBC demonstrations as from next Monday insisting they will only called them off when NASA leader Raila Odinga says so.

Chaos broke out at Posta Grounds when demonstrators tried to ‘bury’ the two coffins by burning them.