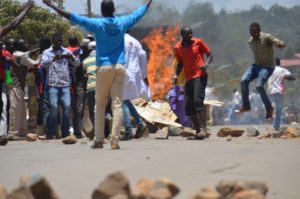 By MN Reporter
Nyatike Member of Parliament Tom Odege today survived a life threatening fall as he and his Suna West counterpart Peter Masara led a charged crowd in protests against Independent electoral and boundaries commission.

The MP’s were leading demonstrators away from Migori IEBC headquarters where that had addressed them when police lobbed teargas into the crowd to disperse them scaring the MP to the ground.

Odege was rescued by his security team who rushed him into his vehicle before speeding off to a safe distance leaving his supporters scampering to safety along Migori County stadium.

Odege who was elected on an ODM ticket and Masara, independent ticket alongside North Kanyamkago George Omamba, Majority leader Mallan Ogega and his South Kanyamkago counterpart Graham Kagali had earlier forced their way into the IEBC headquarters to address their supporters. 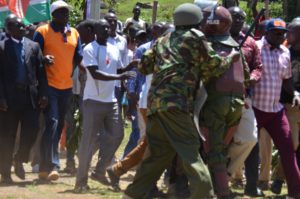 Odege threatened to mobilize residents to man all polling stations to ensure no election takes place in Migori County.

“We are waiting for a final order from our party leader Raila Odinga and if he says there will be no elections then not even a single vote will be cast,” Odege said.

He added, “If Uhuru Kenyatta will not agree with our eleven plus one; irreducible minimums, there will be no elections.”

Deputy speaker Omamba said next week demonstrations will run from Monday to Friday “to send a strong message to the international community.”

“The world must know that Kenyans are not happy with Uhuru and Ruto,” Omamba said. 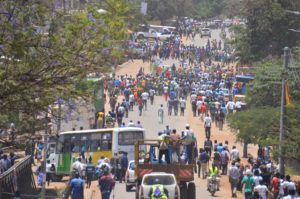 Residents pourt into the streets for anti IEBC protests

Suna West’s Masara however called on his supporters not to tire in fighting for reconstitution of IEBC and urged them to come out in even larger numbers next week.

“The road to Canaan will not be a smooth one but we ask you to keep strong till we get into the promised land,” Masara said.

But the leaders’ speeches were interrupted by supporters who demanded to know where other leaders have been since demonstrations against IEBC began.

“We want to know why they are defying a direct order from ‘Baba’ to lead us in these demonstrations that will see him get to statehouse,” a voice said from the crowd. 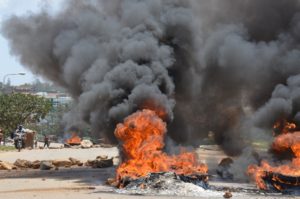 Part of a road barricaded by demonstrators in anti IEBC protests

The demonstrators later engaged the police in running battles as they barricaded the Kisii – Migori – Isebania highway for hours as they lit bonfires and pelted police with stones. 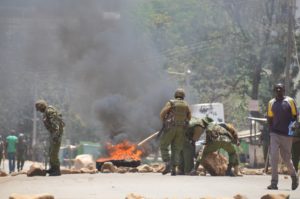