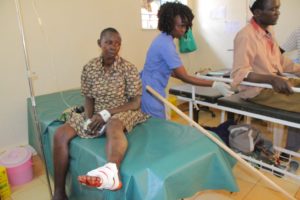 Stella Midecha,56, and Charles Obuya,34, at Migori Referral Hospital after surviving an accident that killed one person. Midecha passed on later.

A woman who survived a grisly road accident at Posta Juction two weeks ago has passed on.

Stella Midecha had died from illness she sustained from the accident that involved a Nya Ugenya bus and a motorcycle.

A close friend to the 56 year old’s family told Migori News that she sustained serious injuries in the head that eventually led to her demise.

Nixion Madegwa said that the elderly woman was transferred to a Kisii hospital from Migori after her condition worsened but unfortunately lost her life.

“I’ve been in touch with a member of the family from Mwache who told me the woman’s condition was worsening but we never expected that she would pass on,” Madegwa said.

Madegwa who witnessed the accident was shocked by the death of Midecha but mourned the woman as a lovely person.

According to police reports, the motorcycle she and three others were riding on rammed into a bus leading to the instant death of Eside Mugarusha.

Charles Obuya, the rider of t he motorcycle sustained injuries in the legs but he is recuperating.

Migori News Sends it condolences to friends and family of Stella Midecha and Eside Mugarusha during this trying time.

VIDEO OF THE DAY