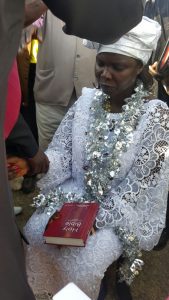 After being coronated holding a bible 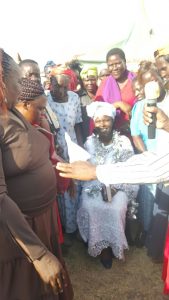 Migori county gubernatorial aspirant Anne Anyanga received a major boost on Thursday after being coroneted by elders from Nyatike at Onger trading center in Macalder-Kanyarwanda ward.

The ceremony came a day before the incumbent Migori county governor Okoth Obado was coroneted as the same venue. (READ THE STORY HERE)

According to the elders coronation can only done once according to the Luo traditions and they are now questioning the authenticity of the expected governor Obado endorsement by Nyatike elders.

They faulted Obado’s coronation saying it was a mere endorsement and nobody can be an elder of “Nyatike” which is not a tribe or clan.

The event was presided over by Luo council of elders’ national treasurer Abel Owuor.

“Obado’s coronation was a hoax, he bought everything including the skin and spear to be coronated as a political mileage,” Owuor said.

In her remarks, the aspirant Anne Anyanga said she now has the blessing of the elders and the church.