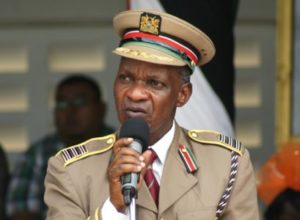 The high cases of insecurity and illegal guns in Kuria region will taint my image nationally, the Coast Regional Coordinator Nelson Marwa has said.

Marwa, who hails from Kuria East called on the the Kuria community to report gangsters who terrorize to the local security agencies.

Marwa said while he has succeeded in Coast region, the cases of insecurity at his backyard are worrying and called the Kuria Community must embrace peace and unity among themselves so as to improve the livelihood.

“For many years peace have been derailed by cases of insecurity due to cattle rustling, burglary and lack of proper infrastructure in Kuria, Above all we still have illegal guns in the area,” he said.

He was addressing residents of Ntimaru market during the launch of the Last Mile project funded by the World Bank noted that Kuria residents must security agencies in fighting insecurity.

He said the Kshs10million project will help light up Ntimaru market and other nearby trading centres in both Kuria East and Kuria West.

He called on the local administration of chiefs and their assistants to work closely with the County Commissioner arresting insecurity in the region.

Migori County Commissioner Joseph Rotich speaking at the same event called the people with illegal firearms to surrender to the government.

He said continued use of illegal firearms will slow down development of Kuria East and its neighbouring communities.

Rotich maintained that Kuria clans must live in unity and accept each other as one community.

He said that the government will continue improving livelihood through provision of electricity, water and roads.

Kuria East Constituency office Manager Samson Nyangi Gitwekere also said that the street lights will enable situation traders and other business persons from the community do their work effectively beyond normal hours.