Notice: Undefined offset: 2 in /home/absalogi/public_html/wp-content/plugins/visitors-online/visitors-online.php on line 438
 Obado urged to speed up work at county stadium, as school improvise in games | Migori News

Obado urged to speed up work at county stadium, as school improvise in games 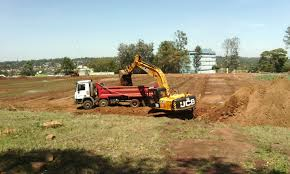 A Migori based sports official has said that the county lacks enough stadia to enable schools and local clubs to prepare and host tournaments and inturn making the county record a very small number of sports men and ladies.

“We don’t have stadia where we can hold these games. Moreover we don’t have courts for games such as net ball, handball and even basket ball,” Odemba said.

The Migori sub-county secondary school games, that brought together Suna East and Suna West sub-counties, were held over the weekend at Pau Nyuka grounds and hosted by Magina F.A.M. Secondary School.

Odemba said the two sub-counties was forced to make private arrangements so as to hold the term 2A championships.

“This school does not have a big playground and as you can see we are using private playground for the finals in all games today,” Odemba explained.

The Migori sports secretary said that they also lacked sufficient funding to conveniently conduct sporting activities and this, he said, was strenuous to the students who were forced to play many games in a short span.

“Such events are supposed to run for a week but you find that this championship only took two days and students find it hectic,” Odemba said.

He added that the squeezing of time made students not to perform to the required standard and many talents were lost because they were not fully explored.

The sports official urged the county government together with the national government to build at least one stadium in every sub-county to help boost sporting activities at grass root level.

Odemba however said that many schools often used devious means to select those who took part in various sporting activities thus making it hard for teams with genuine age brackets to proceed at various stages.

“Schools often bring us documents bearing information about their teams but we realize that some student ages are always faked to enable them play,” the Suna East and West sports secretary said.

His sentiments were echoed by the championship soccer coordinator Joseph Kamadi of Ugari Secondary school who said the ingenuity among officials made some students not to explore their talents.

“The soccer tournament required that those playing be at most 15 years of age with the oldest turning 16 years by June this year but this was not the case as the physical appearances of most players betrays them,” Kamadi said.

Kamadi warned that many talents would be lost as those who were proceeding to the next levels would be locked out as there would be strick adherence to the rules of admission at the county level.