Notice: Undefined offset: 2 in /home/absalogi/public_html/wp-content/plugins/visitors-online/visitors-online.php on line 438
 Is Matiang’i reforming or messing up the education sector? | Migori News

Is Matiang’i reforming or messing up the education sector? 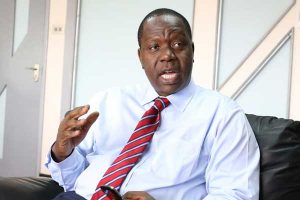 The Cabinet Secretary Fred Matiang’I has been under criticism over implementing own decision without consulting relevant authorities on matters concerning education.

He did well to minimize cheating in exams last year in what was widely believed to be genuine results for the first time.

This will help have good quality of students who will go ahead in colleges and universities.

But let us not forget that exams period for both KCPE and KCSE was too short and the holiday was too long. By releasing exams in December with directive that form one students to take up their chances early January subjected many parents felt economically strained.

Ambitions and lives of young scholar were decided by availability of benefactors.

The Cabinet Secretary again issued directive that no selection replacement without consulting his office forcing Principals to use their money to search for students who had been offered admission in their schools.

Additionally by extending the number of lessons to be covered by one teacher within a week without consulting or explaining why more teachers have not been recruited to bridge the gap of shortage is knee jerk to say the least.

How does Matiang’i expect a teacher to prepare lessons, report to work station early, attend lessons and mark 200-300 students’ books on different subjects daily? Throughout the term and expect quality education and good results?

Does the CS really knows how he is interfering with rights of those engaged by the government to help in achieving quality education and realize vision 2030?

He said if Matiangi is genuine in reforming education, let him consult widely before forcing one sided decisions to be implemented without other stakeholders input.

Sometimes I even wonder if Matiang’i has children in Kenya public school, because he doesn’t feel the pinch on effects of his “reforms”

Like honestly, how can he direct all secondary schools students to have a one week mid term break beginning 26th January forcing parents to organize and collect their children from learning institutions in distant areas?

Personally I know of parents who travelled to Mombasa from Migori, quite an umber went to Nairobi over the weekend to collect children in national schools and other regions..

Most girl schools parents agreed with their principals not release their daughters for mid-term break for obvious reasons.