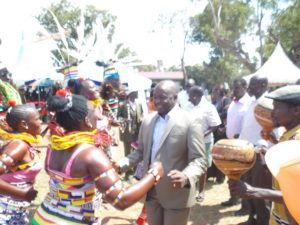 Close to 52.57% of Migori county residents will vote for Mark Nyamita as the governor with the incumbent Okoth Obado likely to be sent home.

A poll conducted by Migori News editorial board which ended for December 25 at midnight garnered 447 votes.
Nyamita, whose supporters led aggressive social media campaigns to vote in garnered more than half of voters at 235.

The incumbent, despite having a legion of Facebook bloggers and paid press team managed to come third with only 56 votes to garner 12.53 per cent.

Anne Anyanga came last with only 13 votes to garner 2.91% of votes cast.

The polling was conducted via strawpoll.de which was open for anybody to come in and click a radio button for the preferred candidate and voting.

The results are automatic and can be seen in public, making it open for all. The post on our Facebook page was also syndicated through popular groups repeatedly to garner maximum reach.

The board though did not carry the polls for other aspirants for the seat and did not include voters who are yet to be decided, since it was our first attempt to use the StrawPoll site.

The results may help aspirants and their campaign teams to re-consider the effectiveness of their bloggers and the effect they have on social media as some have been bankrolling.

Meanwhile the polls are still open and you can vote HERE: