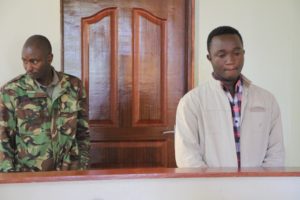 A Kisii University student was Wednesday morning produced at Migori law courts to answer to charges where he was accused of defiling a minor.

This was after he went into hiding after reports of the defilement went public on Friday last week.

According to the girl’s aunt she realised that her niece had been defiled when she noticed her daughter struggling to walk Friday morning.

The mother said she then interrogated the child who disclosed that she had been defiled but warned not to tell anyone.

Speaking to the press, Migori county commander Joseph Nthenge said Jaoko yesterday after he went into hiding after reports of the defilement appeared in the media.

Nthenge urged parents to be aware of their children whereabouts during this time that they are in holiday to avert such cases.

The police boss however said that police were all ears and those accused of such acts will face the full face of the law.

Jaoko denied the charges and was released on a ksh. 200,000 bond. The case will be heard on December 20 this year.