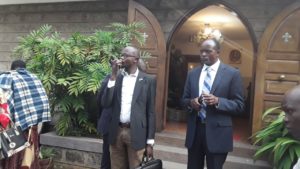 Kenyatta eulogized Okello. 52,  as a true patriot who served the country with commitment and devotion in a message of condolence to family and county residents..

The senator was a former Ramogi and KBC radio presenter.

In his message of condolence to the family and Migori residents, the President said Kenya had

“Indeed, Senator Oluoch was keen on uniting Kenyans. That’s why when he joined politics, it was easy for the people to elect him. They had seen his passion and zeal in providing leadership by espousing national values when he was a journalist,” he said.

The President assured the family and the people of Migori of his support and prayed for comfort and fortitude for the bereaved.

ODM leader Raila Odinga, NASA chief Norman Magaya and county MPs are among those who have condoled with Oluoch’s family.

Raila said: Senator Okello’s death has robbed Migori County and the country of a self-made, humble leader with a promising career in politics. It has also robbed the community of a broadcaster who stood out in articulation of valuable issues like sports, culture and leadership.

Okoth Obado (Migori Governor): Passing of Ben has robbed Migori County of a true son who always wanted peace and unity among local leaders. I have lost a great friend; Ben had a dream for Migori County. On behalf of my family, the people of Migori and on my behalf,  I send sincere condolence to the family, relatives and friends of the late Ben Oluoch Okello.

Ngunjiri Wambugu (Nyeri Town MP): A Senator is the voice of the people, and today you have lost your voice. But a more graceful seed shall surely rise! And once more the Great People of Migori shall roar and their voice shall be heard.

Mark Nyamita (Uriri MP): On my own behalf, my family and the people of Uriri constituency, I send my sincere condolences and sympathies to the family, relatives and friends of “Wuod Aliwa. May his soul rest in eternal peace.

Tom Odege (Nyatike MP): “Chieng’ Jamondo” believed in unrestricted public ventilation of issues and he reflected it in his morning radio talk show dubbed “IWACHO AWACHO”. As a County and as a people, we have lost a man whose humility was legendary.

Paul Abuor (Rongo MP): My heartfelt Condolences to the Family of the late Senator Hon. Ben Oluoch Okello who was also my Constituent. This is a big loss not only to Rongo and Migori County but also to the whole Nation for having lost a promising Senator within the first year of his election.