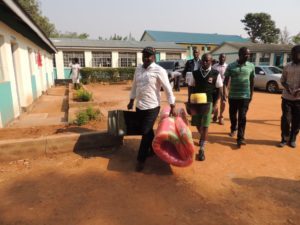 Peter Otieno was all smiles as his dream of going back to school was realized today, a month after other students reported to school.

Otieno secured a scholarship from Uriri MP Mark Nyamita who paid his full school fee and bought him all the items the school required.

He was admitted in Form three at Uriri High School as he had requested.

The student from Konduru village in West Kanyamkago in Uriri is under the care of sickly parents, a  father an step mother. His mother passed on.

His sickly parents who live in abject poverty can not provide for the family’s daily needs and the MP’s rescue of their son came as a reprieve.

Speaking to MN at his home, Otieno promised to  pass highly when he sits for his KCSE next year and be an example to his village.

“Whatever the circumstances am going to face, am going to make it under direct entry to the University,” Otieno said.

He joined form one in 2011 and was on and off school for failing to raise school fees leading to his poor performance in last years examination where he got grade D.

Otieno thanked MP Nyamita for believing in him and giving him a second chance.

“I would like to thank residents of Uriri who thought wise and elected Eng. Nyamita who knows the value of education to this community,” Otieno said.

“We have a number of such boys, orphans, who are just in the village doing nothing. If we have people like mweshimiwa coming to their aid, this will go a long way in helping these young people,” Hongo said.

He also urged sponsored students to work hard and not waste the opportunities they are granted.