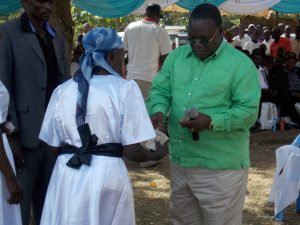 South Nyanza voters have been advised to give their legislators re-election bids to ensure they mature politically at a national level.

Nyatike MP Edick Anyanga warned voters from Homa Bay and Migori counties to avoid changing their legislators to allow them to mature politically.

He said in Siaya and Kisumu counties leaders like Anyanga Nyong’o, James Orengo, Jakoyo Midiow and Nicholas Gumbo have matured strongly in national politics because they have been elected severally in parliament.

“The political maturity of Cord leader Raila Odinga is on his continuous election as a legislator,” he said.

“It is a democratic right of voters to change leaders, but it should be based on work and not aligned to clan and region as we stand to lose as a region,” he said.

He said by re-electing leaders, the region will have more in chairmen of national committees and easier access in offices to have resources go for the region.