Odhiambo: Sensing defeat Ghati is seeking Negotiated Democracy as a fall back 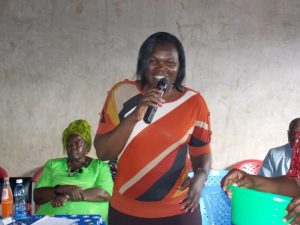 Odhiambo, while speaking to Migori News in Migori town on Sunday said remarks in a section of press last week attributed to Ghati who called for negotiated democracy was in bad faith.

She said the Kuria community is not a minority in the county as they have two full constituencies compared to other tribes which don’t have any.

“She had sensed defeat as I have gained ground against her which as she her start to seek a way out through negotiated democracy. She should come and we force off through the ballot,” Odhiambo said.

She said Migori county should never go through negotiated democracy as it left most people disgruntled in last polls calling for open democracy.

“Minority tribes in Migori are Luhya, Kisii, Nubians, Somalis and Suba where I come from among others. In fact they are the ones to be included in negotiation,” she said.

One thought on “Odhiambo: Sensing defeat Ghati is seeking Negotiated Democracy as a fall back”