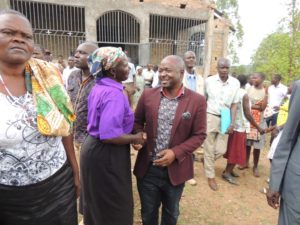 Uriri Member of Parliament Mark Nyamita has asked residents of Migori county to bear with senator Ben Oluoch Okello for missing from the public eye.

Nyamita said Okello’s long absence from the county was due to his ill health.

He said the senator had thus flew out of the country where he has been receiving treatment for the past few months.

“I know there has been a complain about our senator that he is unavailable. On behalf of member of parliament I want to tell you that the senator Ben Oluoch Okello is unwell,” Nyamita said.

The MP asked member of Migori county to pray for the senator who is receiving treatment in India.

“As member of the public we are planning to send one or two people to be with him,” he said.

He asked residents to be patient with the senator and give him the support he needs to enable him recover and come and serve them.

He was speaking during the Migori County dialogue held in Migori town yesterday.