Migori leaders weigh in on Luo-Kuria clashes, call for peace. 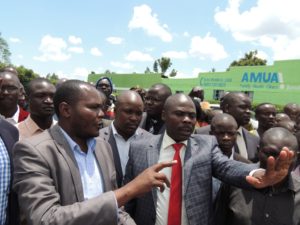 This comes as there was escalating tension along the border between the Kuria and Luo communities in Kuria West and Suna West sub-counties.

Two people were critically injured with several other escaping with minor injuries when anti IEBC protests degenerated to a bitter tribal war between the two communities.

Youths from both sides also accused their rivals of setting on fire motor cycles belonging to their opponents.

Economic activities in markets along the border between the two communities had been disrupted as the residents avoided them for fear of being attacked.

But speaking at Karamu in Kuria West where they visited an injured man at Karamu dispensary, Migori MCA’s led by the Assembly speaker Boaz Okoth urged the two communities to embrace the peace they have enjoyed for year.

“Demonstrations should not be turned into tribal wars. We are fighting for a national course and few people should not turn this to disrupt our peace,” Okoth said.

Masaba MCA Abedi Maroa said the two communities have lived in harmony for a very long time but few people wanted to disrupt the peace.

“We are aware that people who don’t live in these two regions are working very hard to see that there is bloodshed in the region but we are telling them that they will not succeed,” Maroa said.

Maroa asked Karamu residents not to give in to efforts to disrupt the peace in the region.

The escalating tension also attracted the attention of former Suna West MP Joseph Ndiege who condemned those who were fueling hate between the two communities.

Ndiege asked the police to be on high alert and asked them to bring to book all the culprits.

The leaders drawn from Kuria and Luo region under tight security from police held rallies in the regions to forester in the region.