Luos should not decide presidential candidate for Kuria, we are in Jubilee- MP Robi 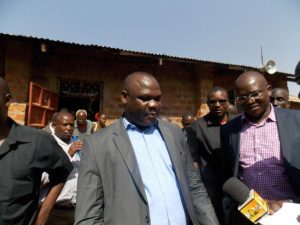 The majority Luo community should not decide a presidential candidate for the Kuria community as we are strongly in Jubilee, Kuria West MP Mathias Robi has said.

Robi insisted that the Kuria community will vote in Jubilee leadership in next polls without being forced by the majority Luo voters.

The legislator said even though the community is a minority in the county, the Luo who are strongly in Cord will not dictate to the community with a premise of sharing county posts.

“In next general elections we will still vote for Uhuru Kenyatta as we are sure Jubilee will still in power and the community can’t be left in the opposition cold,” Robi insisted.

He added: “We are sure of getting the Kuria community to vote as a bloc for Jubilee in ward and national politics because we have steady development benefit from our votes in last polls.”

He said Jubilee promised the community of getting their own county from larger Migori which still stands.

“We are in Migori county without any apology, we also have our democratic right to vote our preferred candidates which should be respected,” he said.

Senator aspirant Solomon Hodo who hails from Kuria said both communities in Migori should reach a compromise on sharing county posts in elections for effective democracy “with respect, unity and equal chance despite numbers.”

Teso North MP Arthur Odera said the Jubilee administration has taken care of smaller communities and urged the Kuria to stake up their county politics position despite their minority status.

They were speaking at Nyankore Secondary School on Friday when the legislator commissioned the school bus partly funded by the CDF kitty and a water borehole completely funded by the kitty.

7 thoughts on “Luos should not decide presidential candidate for Kuria, we are in Jubilee- MP Robi”