Kuria elders declare end of FGM in the community 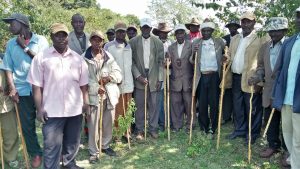 A section of Kuria council of elders, Nchama, after a meeting at Kehancha town during the past function

The declaration comes after more than sixty 160 Kuria elders from four major clans converged at Nyabikonkori Primary School for an anti-FGM event in Kuria East on Monday.

They termed FGM culture as outdated practice which has no help in terms community development at large.

Elders who spoke on behalf of their clans called on the government, non- state organisations and other well wishers to initiate programs which can generate income for the locals who in one way or another used FGM practice as source of income.

Young girls are expected to undergo the FGM December this year after skipping last which was an odd year.

The meeting had been called by Belgium based international organisation ‘Respect for Change’ who thanked the elders for their initiative to willingly discard the FGM.