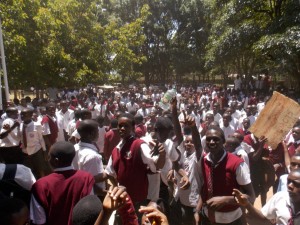 Principal of Kanga High school Mr Michael Ogweno has been transferred to a school in Homa-Bay County.

Mr. Andrew Bwop from Homa-Bay high school has been posted to Kanga to replace him.

Reasons behind the transfer have remained unclear as the school has been managed well and performed highly.

On Tuesday Ogweno handed over administration of the school to Bwop while he had nopt been informed the school he was moving to.

The handing over ceremony was witnessed by Migori County Education officials in amove that shocked teachers and staff just days before this year’s results are released.

“I am not shocked as the transfer is normal under employment contract although I did not expect it,” he said.

County education officials also did not know which school Ogweno has been transferred to and promised to communicate once they have information from the headquarters.

Kanga high since its inception in 1990s has maintained high academic records leading in national exams in the former Nyanza region and nationally.