I will send Obado home in 2017- Anne Anyanga 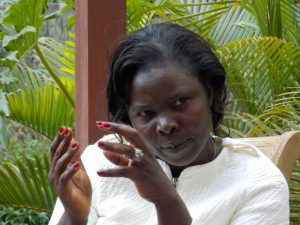 Nyatike MP Omondi Anyanga’s wife, Anne Omodho Anyanga has told off her critics who claim ‘she is not ripe enough’ to be the next Migori’s governor. Speaking to The Nairobian, Anyanga says she is the face of women empowerment in Migori and her agenda is unite all the communities in Migori and fight corruption.

“Those who opposed my candidacy by the mere fact that my husband is an MP are misplaced. I am a leader in my own right. When you lump up my destiny together with that of my husband it means you are against women empowerment,” she said.

She claimed that corruption is the order of the day in the county and if elected she will fight it. “We have instances of land grabbing which should be investigated. There is also the skewed distribution of resources.

What the leadership has been doing is primarily to enrich themselves using public money,” she said.