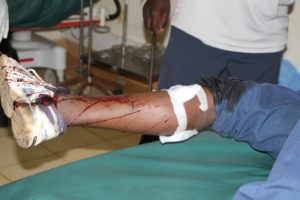 Catholic Bishop for Homa Bay Diocese Philip Anyolo has come out to condemn the police brutality that was experienced on the residents of Migori County on Friday evening where six patients are admitted with bullet wounds.

The Bishop who is also the chairman of the Catholic Bishops was visiting the patients at the Ombo Mission hospital where he condemned the police action on the innocent citizens who were peacefully demonstrating and denied the police and IEBC officials to distribute elections materials.

Addressing the press at the hospital,the clergy said that the conduct of the security forces is not good at all and would like the Inspector General of police Joseph Boinnet and interim interior cabinet secretary Fred Matiang’i to rein to the security forces not to attack the residents in their homes during such operations.

“The conduct of the police officers in Migori and Homa Bay was not good at all as the residents did not want to vote at all and many officers were found breaking into the homes and shot even innocent children like the case of ten years old boy who is an orphan and was shot inside his grandmother’s house during the brutal attacks by the police officers, “he said.

At the same time,the Kenya Union Of Clinical Officers{KUCO}Migori branch has also come out to condemn the police for the brutal attacks on one of the intern clinical officer who was transporting a patient on motorbike from Rapogi dispensary to Migori referral hospital and was attacked by the police officers together with his patient near Migori town.

The clinical officers in media statement read by deputy secretary General Austine Odour condemned the attack on the intern clinical officer Duncan Okumu who was brutally attacked together with his patient by the police officers on his way to the hospital.

The clinicians said that the police officers attacked their colleague despite him showing them the legal document that indicated he was referring the patient to Migori County Referral hospital and left him in total pain.

“The police attacked our colleague on his way to the hospital with the ill patient despite him producing referral documents and descended on him with clubs and batons beating him brutally and left him for the dead only to be picked by Kenya Red Cross personnel’s who picked and rushed him to Ombo mission hospital where he is admitted and recuperating together with his patient, “they said.

The chairman Chris Onditi said that the action of the police are regrettable and unfortunate as the attacked clinical officer was totally unarmed and had the documents to refer the patient to hospital when he met the police and got brutalized.

He wanted stern actions taken against the police officers who are alleged to have been involved in the brutal attacks on the intern clinical officer.