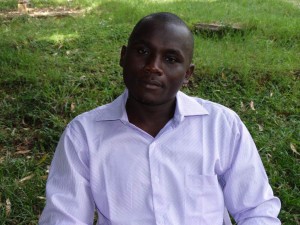 US President Barrack Obama introduced the slogan ‘Yes Youth Can’, a statement which has pushed youths across the globe in achieving more.

On such young man is Joseph Odhiambo Nyapete, 26, who was born in Kakra, Suna East constituency whose life has been motivated by the slogan.

According to Nyapete, it all started back in his early years in primary school where he always sought to try and understand his fellow pupils and the challenges they were going through.

“I always tried to assure my classmates that they could do anything they had set out to do if they didn’t give up,” he says adding that he also encouraged seeking for help whenever it was necessary.

It was still the same in high school where, his teachers, noticing his strong determination and dedication in his class work, developed a strong liking for him. He was soon appointed a student leader after they noticed his ability to make things work and to make his fellow students do the right thing.

“Through this, I was able to interact with many people, both within and without the school,” he says adding that this always came in handy whenever he felt the students were not doing the right thing and here he managed to convince them against doing it.

He says at this point, he also developed an interest of  getting information which according to him was the  only tool the community could use to bring  the youths to light.

After completing his ‘o’ level, Nyapete  noticed that youths from his village were facing acute challenges of lack of information which he was the mastermind  of informing  the  students .

He however used the confidence he gained while he was a students’ leader to approach respective ministries to get information for his disturbed youths.

Through  his aggressive motives of seeing the youths get the right directions and informed , Nyapete managed to approached the ministry of  Youth affairs to volunteer as a mobilizer to see youths reach the offices to acquire information as well as getting loans to boost their living standards .

He continued with the voluntary work with the ministry under the instructions of the current director of the youth affairs Alex Oyuga where he gained the knowledge of approaching the youths to participate positively towards development programmes.

His hope and aspiration to see a bright society through enlightened youths never ceased even when he went to his college to study accounting but also landed in leadership as was in secondary school.

He used the platform to mobilize many youths to form groups  a step that enabled him to be a county celeb as his advocacy never biased any level  of education.

In 2011 Mr. Nyapete was elected as the Migori county ‘yes youth can’ a programme under the world vision As the youth president, Mr. Nyapete  was able to mobilize over 2500 youths across the county to form youth  groups known as ‘bunge’ to gain from  grants that  were issued by the USAID  to sensitize youth groups  into developing themselves.

Soon after that, he founded Migori county bunge Sacco  to continue with the sensitization programmes without relying on donors  for grants .

He used 2500 registered youth groups to preach to organize peace forums and  shows to avert  an chaos that could emerge from the last general elections, a fruit that the county residents bore and still enjoy as no damages or lose of lives were experienced.

He has also used his position to present to the political aspirants the demand of the youths especially the problem of unemployment of the youths which he says is still an acute menace in the county His workmates also appreciates him for good organization and describes him as a determined and down to earth man who never discriminates.

According to the Sacco manger ms Maseline Anyango, Mr. Nyapete likes transparency and always dismisses rumors which she says is the worst stress in an organization.

He however hates politicians or leaders who misuse others  especially youths to climb a ladder to satisfy their  personal  interests.

He however laments that some politicians and  spiritual leaders joy ride on a confused society, a society who cannot  challenge their credibility in case of doubts insisting that is the next  programme that the youths through county  youth forum shall capitalize on to have reliable and good leaders.