Notice: Undefined offset: 2 in /home/migorine/public_html/wp-content/plugins/visitors-online/visitors-online.php on line 425
 Nyamita is first Migori MP to have weeklong People Participation on CDF use | Migori News 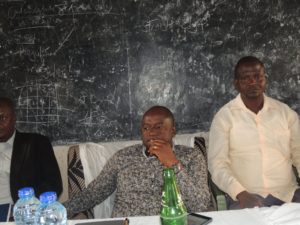 Uriri MP Mark Nyamita has set the pace for being the first legislator out of eight in Migori county to have direct people participation on development desired from the NG-CDF kitty.

Nyamita has utilized the long recess issued in parliament for legislators to directly mingle with citizens from five wards in the constituency, while others have chosen to stay in Nairobi.

Today on Monday, Nyamita held the second day of the participation at Central Kanyamkago ward where he was accompanied by area MCA Alex Akugo and other opinion leaders.

On Sunday the activity, which will end on Friday, started at Kamgundho 1 and Kamgundho 2 sub-locations in North Kanyamkago ward.

“People participation is required in the law to help give a people driven development agenda instead of a few people sitting around legislators and issuing ideas not conversant with people,” Nyamita said.

He promised all requests will be reviewed and written to give a development blueprint for the next five years to include the county government.

“Requests issued by people cut across both national and county government, I am happy governor Okoth Obado has sent representatives all along for us to work hand in hand for benefit of residents,” he said.

Similar meetings will be held annually to “help review the progress of requests and best way to work the following year.”

The legislator said unlike in the past, the NG-CDF bursary kitty will not have a constituency committee but will be held in each of 110 polling centers to give more transparency.

“So far our deadline for January 5 has given us close to 4,500 applicants. We will ensure the best and most transparent selection done in broad daylight to give the most deserving beneficiaries more funds,” he said.

Michael Oyamo, Migori governor Okoth Obado Personal Assistant who joined the forum on the first day said they were bench marking from the visit.

“We are privileged to have a legislator who has chosen to work with all leaders in Uriri, including the governor. We will reciprocate the gesture by joint development projects especially,” Oyamo said.

Akugo said the move showed that voters will reap big on taking their time to vote by having wholesome development.