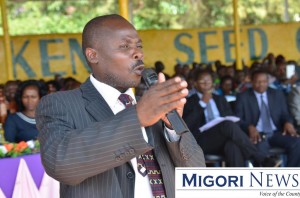 Migori County is considered among one of the richest among the 47 in the country. It is endowed with massive natural resources including mineral resources. The county has been allocated Sh4.1B by the Commission for Revenue Allocation this financial year 2013/2014.

Hon WILLIAM MWITA ABEDI MAROA, the County Member for Masaba Ward in Kuria West Constituency and chairman of Committee on Budget and Appropriation spoke to our writer ATIENO OTIENO on the county budget, a process which begun on 30th April 2013 and what residents should expect in this financial year.

Migori News: Briefly explain the process of making the county budget?
Hon Abedi Maroa: Budget making is not an activity but a very long process which starts on 31st August every calendar year. The current budget didn’t go through the full cycle as elections were done on March 4th and swearing in done on April 22nd. This meant that as a committee there was a lot of things we didn’t do as that was carried by the Transition Authority which midwifes the budget making for all Counties.

MN: When exactly was your committee engaged during the budget making process then?
AM: 30th April, interim Principal Finance Officer and Assembly Clerk submitted executive and assembly budget estimates respectively for the current financial year. Later the speaker collected views from different sectors and committees like agriculture and roads which were tabled before our committee which took a five day retreat to come up with the budget. The final outcome was on June 29th with a budget of Sh5.3billion where the assembly was allocated Sh875Million with the rest going to the executive.

MN: Why did executive get the lion share of the budget at Sh4.1billion?
AM: Most of development is done by the executive while the assembly just does the oversight, but Sh2million is awarded to 40 ward offices for residents to feel devolution closer to them through development.

MN: The Constitution puts a lot of emphasis on citizen participation, at what point did you involve county residents?
AM: The public participated at Maranatha Hall in Migori town to debate on budget estimates and appropriation bill. After this public input we came up with the Migori County Appropriation Bill No. 1 which was accented to by the Governor on the June 30th to be an Act of Parliament to govern implementation of the budget.

MN: Migori is one of counties whose budgets were returned by the Controller of Budget, what happened?
AM: We had to comply with the requirement to have a balanced budget as our first one had Sh1.2billion deficit.
MN: In this budget Transport and Road had the highest allocation at Sh300m followed by Health’s Sh260m and Water and Energy with Sh263m, what priorities lead in sharing of funds?
AM: The roads and transport department got the highest allocation because there is a need to open up new road networks especially in the rural areas to connect the farmers to the market. Health department is fully devolved and we needed to open new dispensaries as well as improve efficient drug supply to our hospitals. While clean water and electricity supply to families and learning institutions was also key in allocation.

MN: What is a Supplementary Budget?
AM: This is the spending ability of the county and we have a lot of surplus in the recurrent expenditure. Let’s say we allocate Sh100,000 to run an officer and for two years and in Sh20,000 is used to have a surplus of Sh80,000 while in the second year only Sh30,000 is used. This creates a surplus which will require a supplementary budget to manage this ‘floating’ money.

MN: So when is the county expecting a supplementary budget?
AM: We are in the process recruiting a chi officer in charge of finance who will tell us on expenditure or where the budget is low before we see what is in supplement.
Areas to seek for supplementary will be the new MTC as there are new students to be admitted and in establishing a county radio station and later a TV studio which will assist in disseminating information to residents and also air live assembly proceedings.

MN: We have reports that over Sh70m for the county weren’t spent in first transition allocation, were the money taken back to the Treasury?
AM: This was a rumour and like all rumours it lacks any iota of truth in it. Under the Public Finance Management Act all money to the county and CDF are safeguarded and in case of the county it is held as a trust in the Central Bank. So any amount not spent will still remain in the treasury.
When county wants its money it will make requisition to the office of the Controller of Budget for the money to be released to the County Operation Account and later to various spending account.

MN: What measures are in place to increase revenue collection?
AM: We have several loopholes in the finance department especially the receipting system where fake receipts are many. But I believe that the Finance Bill which will be law by end of this year will offer the best remedy to seal these loopholes. The bill has heavy penalties and fines for offenders.

MN: Devolution has been in effect for over 8 months, how can you rate and compare Migori county nationally?
AM: It’s a short a time to rate counties because money for implementation only came in early September and two months period is short to achieve much. But the county has made major strides we have a decent assembly, governor and his deputy offices.
We have in place an Integrated Development Plan which is our development blue print. We have many ongoing development projects but people over expectation have clouded the gains made.

MN: There is a lot of talk about Migori being unable to get foreign investors compared to other counties.
AM: Foreign investors don’t come to do things for free; they’ll have investments which will have to be secured by land lease of up to a century which will be gagging us. We shouldn’t have poverty mentality where when you see a Mzungu, even a carpenter, is seen as an investor. So when the governor tells residents to invest in our county doesn’t mean we can’t get foreign investors. We have residents, and those living in Diaspora who can invest home.

MN: What measures is the County Assembly putting in place to curb Corruption?
AM: The assembly has three mandates key among them being oversight which we are currently enforcing. At the moment the Public Accounts Committee is doing a number of investigations, already several people have appeared before it. We want to ensure that corruption isn’t devolved in Migori. What was budgeted and every shilling used will be accounted for, believe me on that.

MN: Any other upcoming bill within your committee?
AM: There is Wards Development Fund Bill which is a replica of the CDF which recommends at least 10 percent of annual county budget being allocated to wards. So in the current budget of Sh5.3billion the assembly will be allocated Sh530million which if shared among 40 wards will see a Sh10million allocation each.

MN: Internal revenue collection was pushed to Sh1billion in a year by the assembly; do you think this can be achieved?
AM: Yes, we have that potential in first months we only collected Sh9million which has been pushed to Sh24million in a month. When all loopholes are sealed we can hit Sh80million per month.

MN: Your partying shot to county residents?
AM: Residents should criticise their government both negatively and positively with open eyes focused on good things. As a member of the assembly we are ready to work for them.