Notice: Undefined offset: 2 in /home/absalogi/public_html/wp-content/plugins/visitors-online/visitors-online.php on line 438
 OPINION:Why Obado should be sent back to Rapogi, these endorsements are an insult | Migori News

OPINION:Why Obado should be sent back to Rapogi, these endorsements are an insult 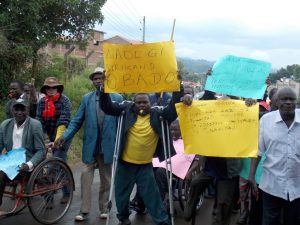 The main reason incumbents world over seek re-election is to finish up the good work they are doing or finish initiated projects, which Migori governor Okoth Obado has a glaring deficiency.

Recently a friend asked me which project, if ever, Obado initiated in his five years tenure and should be cleared in second term.

I found none, which is pitiful for a man who managed billions since start of devolution.

I will start with Migori town long before devolution which has not changed under the incumbent.

The town is still stinking with piling garbage with striking workers we saw under municipalities over unpaid dues still affecting us.

Just like in councils, employment is still mainly through political patronage and we knew of funds through councillors numerous trips which are still on under the incumbent.

Haphazard town plans of illegal stalls, prolonged traffic snarl ups have gone from worse to worst. I won’t even go to bursary allocation as MCAs against the governor are always short changed.

Obado has completely taken the position of former mayors: stick-straight, authoritative, remote and impassive on his throne. A hermit!

When he was elected, I was among voters who saw hope in his leadership as he sold himself as a near-ascetic reformer, an outsider, a Christian, as a man who was capable of giving the county a fresh start.

He had an opportunity to make real reforms early on by boldly reshaping Migori’s path. He wasted it. And we are disappointed.

Perhaps the first clue was the unusually long time it took him to appoint his ministers; which came as a disappointment through a measly crew patched up together blindly.

They initially launched projects for fear of a re-election through the election petition, afterwards they went kaput.

Job creation promised by Obado through increasing production failed since he has never initiated any industry under him. His going to bed with BAT (Which hosted his official residence) speeded up exit of other Tobacco firms, most notably Alliance One.

Obado is comfortable with conditions that make an economy and residents uncomfortable just like deplorable condition of public health centers across the county and lack of ECDE centers.

Apart from strikes by medics, open stealing of medicine, lack of equipment patients in public hospital can’t be fed in hospital and often lack basic things like toilets and water.

And to crown Obado’s epic failure I won’t sign off without talking of his stooges of bloggers. Anyway, why in the name of our great county would a Governor who knows that he has worked well and done what is expected of him hire tens of bloggers, including respectable people to make so much noise about his ‘achievements’?

Ati Governor’s Bloggers: a group of young men whose only claim to fame is that they have smartphones with bundles spending 24/7 abusing people on social media and attributing everything to Obado including the Eye Centre donation at Migori Referral Hospital by Fred Hollows Foundation.

Is the Governor aware? Is the ‘Sirikal Matiyo’ really aware? And what happened to the County bus? Where did it disappear to?

Any excuse notwithstanding, leadership is as much about perception as it is about action which Obado has failed to cultivate despite his myriad of failures made worse by his aloofness from the citizens.

Migorians expected a fair and sweeping clean-up of corruption. There is nothing Obado has done to show for this as his administration has even been cursed by people living with disability demonstrating against him.

And to make it worse instead of treating the malady, Obado has gone in a self-gratification spree of being installed as elder, hosting allowance-seeking delegations for event managed coronations which will take him back to Rapogi in 2017.

(Sankara, a Migori county resident is an Environmentalist based in Nairobi. This opinion was specifically written for Migori News)

One thought on “OPINION:Why Obado should be sent back to Rapogi, these endorsements are an insult”