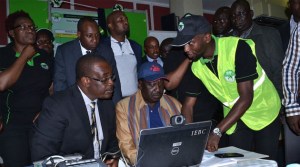 This is an interesting read: Saw it wise to share this with you due to your following: Message to the voters of Homabay, Migori, Kisumu and Siaya nations.

We have been respected as a people who have fought for Freedom in Kenya to make this country better.

This is by projecting a common front on issues and voting as a block. We’ve done even the unimaginable by embracing KANU when it cooperated and merged with NDP, a party that discriminated us since independence; voting a Kikuyu-Kibaki- a tribe we believe it’s early ruling elites thwarted Luo nation emancipation.

All this we did when our leader, RAO, showed us the direction to take. In this journey, wherever we decided to take a difficult option , not all did understand the future which our leader, RAO saw.

Orengo, Ochuodho, Donde,Nyong’o etc protested at some of these times, and took alternative routes.

However, those who later saw the sense and wisdom in the direction our leader showed us (Orengo, Nyongo etc) joined the people and have been part of this transformative agenda to date. Cooperating with KANU imploded it from within breaking the 40yrs of misrule.

Supporting Kibaki, a Kikuyu that betrayed us as a people from independence, laid foundation for free education, infrastructural development, transformation of our parastatals and midwifed constitutional review which laid the foundation on the current devolution take off, among other positives.

In these instances, the choices we made were not the best since these were not our exclusive absolutes, but a mix of absolutes and relatives.

The absolutes included the agenda to transform the country which was not negotiable. But relatives included negotiating for the numbers to win elections to support our absolutes, which we did by these decisions.

It means that at certain times in history, certain decisions have to be made, however bitter they can be, to secure our future, not the present.

The time to make such a decision is now. Why now? Our future depends on our strength, which depends on our unity and togetherness in approach and actions.

In NASA, we have been given the privilege to fly the coalition presidential flag. The key factor is our resolve to stick together in the transformation course and vote as a block. We are number three in the pecking order of population numbers in the coalition after Luhyia and Kalenjin at the NASA Pentagon.

But our consistency in voting within a single party ideological path gave us the ticket and gave the Kamba the deputy ticket.

This unity is currently threatened by the wave of independent candidates. Our respected brothers, Luhyias, are more than us. But they do not vote as a block as they have been mixing different parties with elected MPs, MCAs, governors and presidential votes and this has denied them opportunities at the negotiating table.

We therefore have no choice but to remain within one umbrella party, ODM and vote it’s candidates.

This will be the basis of negotiating opportunities and privileges for our people in the next government, and also in future coalitions. Each one of us had our preferred candidates for the seats who didn’t make it to be party candidates.

Some resorted to be independents.

They should have remained with the party if they care about our future, which lies in our strength to negotiate for opportunities and privileges in our coalition government and counties we control using our numbers as well as negotiating for positions in future coalitions we will be part of.

This is because the national government controls 87% of resources. Devolved funds are only a maximum of a paltry 13% of national resources! This is the most important thing. We have had MPs, councillors, MCAs, governor’s etc for all the years we have been discriminated, but that has not helped out.

Any leader contesting as an independent, any person or anything supporting or contemplating supporting independents or other parties is the biggest enemy to Luo nation pretending to offer alternative leadership.

This is because we may have the presidency and fail to have a strong bargaining power for resources and opportunities to our people if we don’t have enough MPs and control majority of counties at executive and legislative levels.

This means that in unfortunate event that an independent candidate wins, we will be subjected to arbitrary rule by the wife, girlfriends, concubines, their cartels and all those amorphous vultures that are dreaded and cannot be seen now.

And if seen, they’re hiding their canal claws to protrude once in power. This is therefore a call to us to us to vote our unity and for our future-SIX PIECE for ODM. Those selfish people waiting in the flanks for self benefit through independent candidates who care not about our future will not agree to this as our unity threatens their selfish motives. Let’s secure our future, let’s vote ODM.