Notice: Undefined offset: 2 in /home/absalogi/public_html/wp-content/plugins/visitors-online/visitors-online.php on line 438
 Of when a Luo dies and how the village conspires to rape the bereaved | Migori News 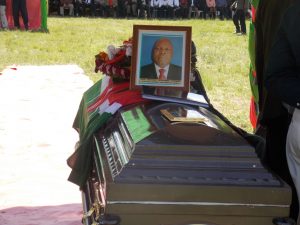 Just like other funerals in my village, Mzee Owino’s funeral began with an ear splitting scream, which spread across the village like a wild bush fire. It was the women and children who arrived first. This happens everywhere; children because they are curious and women because they get shocked by things that shouldn’t shock them.

On this day I arrived last together with some old men trooping into Mzee Owino’s homestead in quite dignity, to a nice little shade where I sat mute, eyes locked in the space between my feet.

I watched the unfolding circus with amusement: The wailing women. Funeral thieves. Scoundrels defecating behind the granary. Men leering obscenely at the youngest widow to inherit. The village pastor walking around with an air of importance and the army of politicians who descended on the home like flies to a pile of dung.

I watched bitterly the in-laws who took nubile daughters from the departed and promised to bring cows but instead, they wrung out a kindergarten of kids from the women without ever paying a far thing. They put the daughters of the clan to work on their farms for years, reaping harvest after harvest on whose proceeds they wined and dined without giving even a single coin to the women or their clan.

I saw all that. I watched all the chicken thieves who stole from the departed. I watched the neighbors with whom the departed had a long running land dispute. I watched in disbelief, Moseso, the village night runner who terrorized the family for years shedding his crocodile tears.

I watched the old man’s spoilt close relatives who colluded with the enemies of the family to plunder the homestead.

I sat and watched all these people trooped in, dressed to the nineties, to mourn a man they neither loved nor respected.

Mzee Owino’s home was full to the rafters. Mourners came by buses, boda boda and on foot. But most were not here to cry for the dead, but to reap from the dead.

There was Jesse, the village photographer who snapped up everyone and quickly pasted the photos on the pit latrine wall. Those pictures had his name embedded- free business advertising.

The boda boda people hiked the fare, knowing the town people trooping in were too rich to care whether it is 20 bob or Sh 200. Timotheo, the great and respected village pastor demanded Sh 10,000 in tithe arrears, before he could as much as put on his white rob.

Knowing the family was desperate and poor, Odeny,the village tycoon insisted on buying the family’s only cow for Sh 6,000 when its real value was three times more.

There was this aspiring politician a retired idler turned a motivation speaker, who graced the occasion.

The family allowed him a moment to greet the mourners. And the man, with oversized T-Shirt screamed ‘’Adinasi- MCA wa nguvu!’’ repeatedly for 45 minutes and tearfully reported how it was him who bought the attires in which the departed was getting buried.

Business people aside, there was an army of fun lovers doing things behind banana groove, taking selfies beside the coffin and unleashing tweets live from the funeral. They were saying ”look at those poor cute orphans…… Woiyee…. Who will take care of them?’’

But their body language were screeching ‘’This is so cool!’’ If you asked them who died, what killed him and how many kids he left behind, they wouldn’t have the slightest clue.

Bitterly I sighed and wished that the one and only village noisemaker during our childhood, Aluso Boss was alive to shout, ‘’Where the hell were you when this poor man suffered disease, starvation and neglect; when his children and highway men beat robbed while the assistant chief watched?’’

As soon as the body was lowered in the grave, The dead man’s nephew stole all the collection, the politicians who promised to educate all the orphans rose and never returned and the assistant chief who swore to protect the widow started to shake her for bribe the next day.

Indeed the moment that coffin was lowered in the grave, the crocodile tears ended, the tents and plastic chairs were folded and rolled into the back end of the pick-up and the entrepreneurs who came to the funeral to sell njugu left. And never returned.

Mzee Owino’s homestead went quite, like a grave yard the way it was for years as the departed battled multiple organ failure.