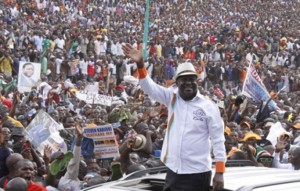 ODM has organized very successful rallies in Migori county due to massive grassroots support that the party enjoys in Migori and elsewhere.

The recent Raila rallies held recently in the county did not enjoy equal popular support as the ones organized by the other lesser powerful leaders should send a clear signal to the ODM fraternity that the party now needs to work out a survival formula beyond Raila.

The common man is begging to focus far beyond Raila Odinga. As a courageous, visionary and charismatic leader Raila has done Kenya proud. He has run his race, he has fought a good fight but time has come that he has to pass the baton to somebody else.

That fact has never been clearer than as demonstrated by the game that Raila played when he came to Migori recently when he kept the wrong company. That sent the wrong message to the ordinary ODM members. The younger leaders need to recognize that the party is bigger than Raila and they need to start working out a plan to keep ODM growing higher to deliver on the Kenyan dream.