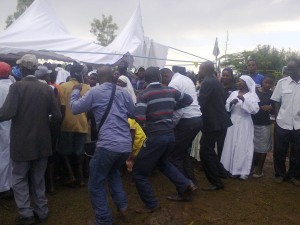 Journalists dance during funeral of a colleague in Homa Bay county

Mbaya who hails from Kakrao Ward said earlier he wanted to be an MCA, but pressure from his constituents convinced him to unseat the incumbent Junet Mohammed.

“I have looked through all other aspirants for the seat and realized none has the capacity to lead Suna East except me,” he said.

He said he is still consulting elders before he launches his bid officially and the join the race with among others Nairobi Majority Leader Elias Okumu, former Migori MP John Pesa, businessman Patrick Odipo among others.