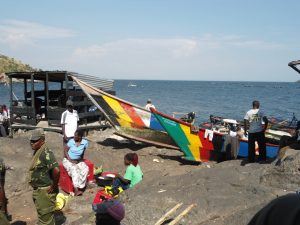 The Nyatike NG-CDF kitty plans to build the houses after a consultative meeting with locals.

“We had a meeting locally where it was agreed we build a police quarters to allows for thirty rotational officers at the island and a police camp in Muhuru Bay mainland to help in response,” Odege said.

In 2012, during protracted standoff over ownership both Kenya and Ugandans were only allowed to have 12 officers at the island.

Kenyans on the island said they overwhelming welcome the chance to build the houses.

“Most police officers in Migingo have been grappling with housing issues and lack of a nearby base to report to help them tackle cases of insecurity,” Odege said.

The legislator said already plans on creating paper work for construction of the houses which will be able to house 30 police officers and establish a camp are underway.

“Probably by end of this year we will have advertised for the construction,” he said.

Locals said by building the house, the area will be more secure with Migingo Beach Management Unit chairman John Obunge lauding the move.

“We are welcome to the move, and hope the houses will be built on the island or nearby Ugingo which is only 200 meters where Kenya controls,” Obunge said.