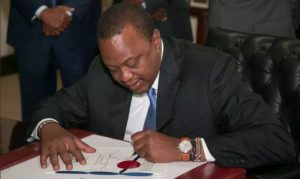 President Uhuru Kenyatta when he signed into law the bill

Two Migori county legislators said the chaotic scenes that greeted the passing of 8 per cent fuel levy will help stop Kenya from being sold off to China over debts.

Suna West MP Peter Masara and his Nyatike counterpart Tom Odege said the move, though painful to Kenyans, was best for the country.

The legislators when President Uhuru Kenyatta recently was in China to seek loans for the country he came back empty handed with warning that loans burden was high.

“We were risking being auctioned off in China, in other country we have had the China taking up infrastructure and revenue collection to settle off debt in threats on sovereignty, we can’t go that way,” Odege said.

READ ALSO: (VIDEO) Those who voted for Jubilee should give MPs a break over fuel tax vote- Odege

The two called on Kenyatta to take up the goodwill of Kenyans in accepting the passing of the bill by ending runaway corruption that have been siphoning off funds meant for development.

“Out of funds set aside for development only thirty per cent of budget end up doing the work, the rest of eaten by recurrent budget and corruption, we need a end of corruption,” Masara said.