Notice: Undefined offset: 2 in /home/absalogi/public_html/wp-content/plugins/visitors-online/visitors-online.php on line 438
 Caroli not done with Mbadi, his brother in the ballot for Suba South seat on Ford Kenya | Migori News

Caroli not done with Mbadi, his brother in the ballot for Suba South seat on Ford Kenya 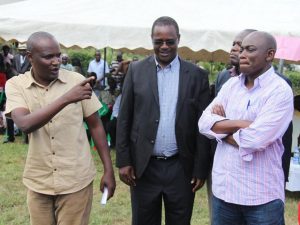 ODM chairman and Suba MP John Mbadi has gone underground away from the media despite winning a protracted nomination battle.

Caroli is not done with clipping down Mbadi, whose development record and use of the CDF kitty has been the main born in the campaigns.

His brother Tumaini is being fronted for the seat in a Ford Kenya ticket and has already created panic in Mbadi camp and with support of his brother the chairman may just find himself a casualty.

“Tumaini has the gift of the tongue unlike his elder brother who has the gift of the pocket. when the two are joined together subsequently Making Mbadi a minnow,” Anderson Ojwang, former journalist turned politician in Homa Bay county posted on his FB profile.

Ojwang’ added that Mbadi open support for Homa Bay governor Cyprian Awiti and how he handled the party nominations will be his undoing.

“Mbadi is viewed as a minifestation of flawed and shambolic ODM election in Homa bay and the independent wave could easily send him packing. He equally tried to be a king maker in Nyanza. political matrix and this did not go down well with aspirants and voters and it is more of pay time,” Ojwang posted.

Mbadi has chosen to go back to the ground as he has a dream of being the Homa Bay governor in 2022.