Bomb Scare a Tanzanian Arrested With Explosives at Isebania 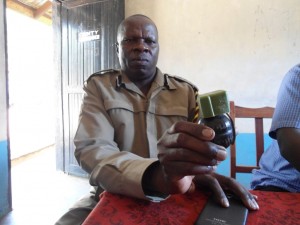 The government has termed the proximity of Migori county to neighbouring Tanzania and Uganda as a big threat to war against terrorism.

County Commissioner during an interview with Migori News said that security personnel are on high alert to defend the country and urged residents to help police by offering information.

On Monday 7th this month business at Isebania border point came to a standstill following a bomb scare after police arrested a Tanzanian who tried to cross inton the country with explosives.

He also had several dry cells, two phones of Nokia and Forme model which can be used to detonate an explosive as he tried to cross into the country on foot.

Area deputy OCPD David Kirui said they acted on a tip off from the public after they noticed the man was acting suspiciously.

He said police waited for the suspect to cross over to Kenya before nabbing him.

“Members of the public noticed acted suspiciously and alerted police from both countries on the suspect who told us that he wanted to use the explosives in gold mining in the county and we arev still establishing the truth,” Kirui said.

He said that they are working with their Tanzania counterparts in investigations to matter and ensure that the explosives will be used in mining in the county.

On February police in Migori town arrested three suspects, who included two Kenya Defence Forces officials and one mason, with a grenade by police on were arrested by police on patrol.

A vehicle, a Toyota Fielder KBG 280F was also impounded by police as the case is still going on in the court.

Two KDF officials had work badge showing they were stationed at Embakasi base while another claimed to be an ex-officio.

“One had complete documents while the other said he had worked for five years and was discharged on 24th December last year although he didn’t have clearance documents,” Opiyo said.

Police officers have said they are on high alert after recent cases of terrorists attack in the country.

“We will not tire until all suspects are brought book and want residents to help in fight against crime,“ he said.