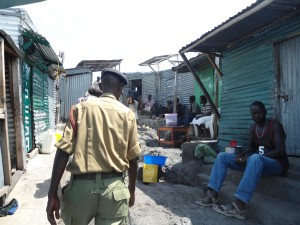 Already tension is high at the island between Uganda and Tanzania officers over what transpired as 3 suspected pirates believed to be from Busurwa beach, Tanzania were shot dead.

Three others were arrested after they were confronted stealing fuel, fish and nets from fishermen.

The incident happened about 30 kilometers from the disputed island although it is not clear if it happened in either Kenyan, Ugandan or Tanzania waters.

Ugandan officers patrolling the lake confronted the suspects before they began exchanging fire and shot the three.

Three others are believed to have thrown their guns in water before surrendering.

“On Sunday eight Tanzanian police officers arrived at the island and demanded an explanation of the incident,” he said.

Tension I high as security officers and residents of the two countries traded accusation of what happened.

Nyatike police boss Dashon Chebaka confirmed the incident and said it had happened in Ugandan waters and Kenyans have no part of it.

“Our officers stationed at the island reported the incident which happened in Ugandan waters. We are just on high alert at the island as we watch progress,” he said.