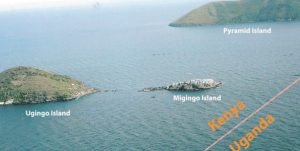 Migingo Island is in Kenya

Angry fishermen have called on President Uhuru Kenyatta to assure them that they are Kenyan citizens by coming out and dealing with Ugandan security who have been forcefully taxing them.

Most affected regions include Sori, Muhuru Bay, Tagache and Lwanda Konyango beaches where fishermen have been forced to pay up to Sh5,000 by Ugandan security officials.

Benard Okombo, the chairman of Tagache beach management Unit said fishermen are forced to eat raw fish when they fail to pay the amount.

“I have two members who were forced to eat raw fish after failing to pay the amount and their stock and nets taken by Ugandans,: Okombo said.

He said arrested Kenyan fishermen are always arrested and jailed in Ugandan where they face foreign lawa.

Kachieng MCA Brian Osodo and his Muhuru Bay counterpart Evron Maira have told the president to use his mandate to protect the nation and its territorial boundaries.

“If the harassment by the Ugandan police is not well handled by the Head of state then the people will take upon themselves to protect themselves in the best way possible,” Osodo said.

This comes only a week after the Lake Victoria Basin members of parliament raised serious complains about the kind of treatment the Kenyans fishermen undergo at the hands of Ugandan police forces.