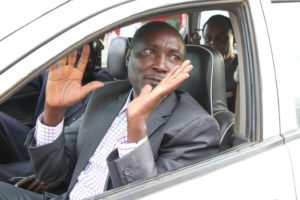 Kuria elders and opinion leaders have read the riot’s act to Migori governor Okoth Obado over chaos that rocked speaker election and denied their son, lawyer Kerario Marwa a win.

Speaking in Kehancha town on Thursday, the group said they will stop paying taxes to Migori county government and skip presidential campaigns if the August 31 chaos is not addressed.

Elder Chacha Musambi and Mokerero MCA Joseph Hoyo said Marwa was headed for a win when youths invaded the assembly and insisted his rival, and Obado right handman, Boaz Okoth is declared winner.

“We won’t pay any taxes to the county government until we know who attacked Kerario and Kuria MCAs in the assembly, who sent them and what was their motive,” Musambi said.

Musambi said they had stopped paying taxes before and will not hesitate to do so again until the community gets a recourse why.

Hoyo said over Sh4million was used to bribe MCAs who each got Sh50,000 each, but Marwa was voted by both Kuria and Luo members after getting 31 votes, more that 28 needed, before the exercise was stopped.

Hoyo said over 83 per cent of Kuria votes went to Obado including his ward where Independent candidate Ochilo Ayacko deputy Lucas Mosenda hails from.

“We voted for Obado as a Kuria community, I personally led his campaigns. But youths still targeted me with police doing nothing,” Hoyo lamented.

Marwa said he will seek justice in court, which he believes he will get.

One thought on “Tell Obado we won’t pay taxes, skip elections if Kerario is not speaker- Kuria elders”