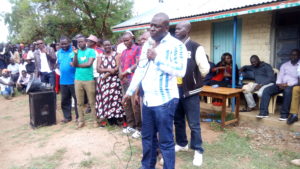 Nyatike MP Tom Odege has called on police to increase a manhunt for Sori Boys High School who escaped after leading dormitory arson on Thursday.

The legislator issued the stern warning to students of the school after the sad incident.

Addressing the students, the legislator said that the law will take its course and the culprits must be arrested and be arraigned in court to face charges of arson and destruction of property.

Earlier the legislator had issued affected students with mattresses after the attack.

“We are aware Migori police are narrowing down on the suspect, others will be arrested soon,” Odege said.

He said students found to have committed the crime will be expelled from the school and their parents will pay for the damages.

“As a community we have invested a lot in school, we will ensure a stern message is passed through,” he said.

Karungu Division Assistant County Commissioner Moses Mugambi said that the students have to be disciplined in all that they take part in as it will affect their future endeavours.

He said that those found to have committed the crime will be blacklisted and their names given to the security agencies across the country and they will be denied certificates of good conducts that will ruin their future progress.

He wanted the students to be disciplined and focused in all their endeavours.

A dormitory that houses 80 form three students was razed down on Thursday night in an arson attack that has left the entire school community agape and surprised.