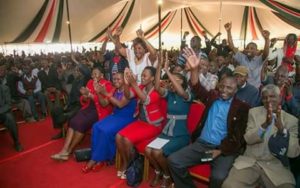 Mbadi told Migori News over the phone on Sunday that the meeting hosted by President Uhuru Kenyatta and his Deputy William Ruto was “stupid, primitive and pathetic.”

“Such delegation meeting for handouts as dead with removal of former President Moi, it is pathetic that Jubilee is cultivating it back.” Mbadi said.

He said the delegation was only part of the Kuria community and NASA leader Raila Odinga plans rallies in the community before October 26 poll.

“That delegates number won’t represent the voter in the re-run as we plan to meet the people directly,” Mbadi said.

He said party officials and elected MCA from Kuria are already campaigning in the region despite county leadership wrangles.

“We have a petition by two warring faction of county leadership which was caused by governor election, until it is resolved we need them to campaign together,” Mbadi said.

The factions are led by two chairmen, Philip Makabong’o and Festus Mapesa.

During the Wednesday meeting, Kuria leaders led by MP Marwa Kitayama (Kuria East) and Mathias Robi (Kuria West) led over 2,000 delegates were hosted by Kenyatta and his DP William Ruto.