Notice: Undefined offset: 2 in /home/absalogi/public_html/wp-content/plugins/visitors-online/visitors-online.php on line 438
 READ Obado, Ayako reaction to calls by Raila to initiate handshake between them | Migori News

READ Obado, Ayako reaction to calls by Raila to initiate handshake between them 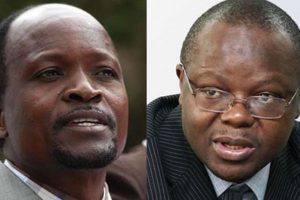 Raila said the handshake will be similar to the one he had with President Uhuru Kenyatta at national level.

This was the biggest news from Saturday homecoming party of Women Representative Pamela Odhiambo at Piny Oyie, in Suna West constituency.

“Governor Obado and Ochilo should great each other, I also greeted Uhuru and that is the spirit we need in Migori. I will personally call them to have them shake hands in my presence,” Raila said.

Despite the two skipping the function, their presence as was felt through tension by their supporters the end of August 8 elections between them which saw polarising campaigns marred with death, violence and election petition still at Kisumu Court of Appeal.

Obado won with the ODM ticket against Ayacko who was an Independent candidate, a win his rival said was marred with irregularities and wants it to be annulled.

Speaking to Migori News over the phones on Sunday, the two leaders offered their reaction to the handshake calls.

Obado said he was personally ready for the handshake which he said will bring peace which is currently needed in Migori.

“That is ok, peace is what we need, everybody needs peace. That is good is small differences can be sorted out,” Obado said.

Obado said he was ready to have the national handshake replicated in Migori.

Ayacko on his part said all handshakes should be done in structured way, but first “people must be willing, there must be discussion and understanding” before the actual handshake.

“Handshakes don’t just happen, they requires good will, utmost good faith and so many things,” he said.

He said his willingness for a handshake with Obado “will first require a one and one discussions.”