Notice: Undefined offset: 2 in /home/absalogi/public_html/wp-content/plugins/visitors-online/visitors-online.php on line 438
 Obado to know petition fate on Tuesday as Ayacko faces Sh27m in cost if he lose | Migori News 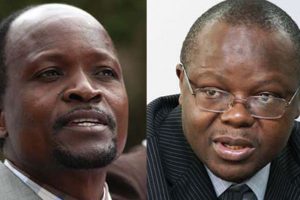 All eyes on Tuesday will be on Migori High Court judge Hillary Chemitei  who will give judgment on an election petition challenging governor Okoth Obado’s win.

The petition which seek the election nullified was filed by former cabinet minister Ochillo Ayacko who vied on an Independent ticket and came second to the ODM candidate.

If he loses the petition, Ayako may be forced to pay Sh27million which was request in last submission by lawyers representing IEBC, Migori county RO Charles Mutai and governor Okoth Obado as first, second and third respondents respectively.

The judgment will be issued at noon.

Ayako was represented by lawyers Odhiambo Roche and Samuel Nyasimi who said the amount requested was high and asked for about Sh10m or the judge to be guided by a hand of God in arriving at a figure.

The cost will be determined by the judge as he rules over the case tomorrow.

The two said the election should be called off as it was not free and fair, arguing that 697 polling centers out of 826 in the county, which translates to 84 per cent were marred by irregularities.

But IEBC lawyers led by Joshua Ochwa and Eva Kahiti said the errors could not change the will of Migori voters and wanted the petition to be thrown out with Sh12million cost to them.

Obado’s legal team led by Rodgers Sagana and Evans Ondieki said they should be awarded Sh15million as costs, bringing the total to Sh27million saying a win of over 89,000 votes was convincing enough.