Notice: Undefined offset: 2 in /home/absalogi/public_html/wp-content/plugins/visitors-online/visitors-online.php on line 438
 OBADO: I respect Raila, but I support Dalmas over Ayacko | Migori News

OBADO: I respect Raila, but I support Dalmas over Ayacko 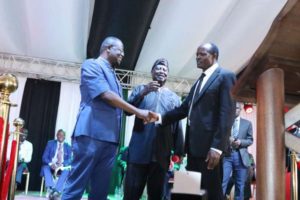 Migori governor Okoth Obado has said he won’t be intimidated to support former Cabinet Minister Ochillo Ayacko who was handpicked to be ODM flag bearer in October 8 senator by-elections.

In an interview with Migori News, Obado said he respects ODM party leader Raila Odinga and the party, but as a voter he will support former Rongo MP Dalmas Otieno who be an independent candidate.

Obado told off his rivals who are using his stance as a sign of disrespect to Odinga and the party.

The governor said the same ODM leaders attacking him for going against the party ignored him despite being ODM candidate on August 8 and supported an independent candidate Ochillo Ayacko.

“Despite winning governor ODM ticket on August 8, the same leaders who have been claiming I am against the party and my leader Raila Odinga openly de-campaigned me, no finger was raised against them. i wont be intimidated,” Obado said.

He said leaders claiming to be senior most members of ODM and closest to Raila in Migori county, should first face disciplinary action.

“Nobody is more special in the orange party, these open impunity and double standards should not be allowed in the party. Those who supported an Independent candidate in last polls should first face disciplinary action” Obado said.

He added that: “We will not accept two or three people to seat in Nairobi and dictate to Migori residents where to go as if we are blind.”

He said his stance is preventing individuals who think they are close to the party and want to dictate who to be voted for in 2022.

“If anybody comes to you here and tell you to support him (Ayacko) because the decision was made from above, tell him to seek votes from above,” Obado said.

He said his stance against Ayacko was not based on fear of oversight, as the same “propaganda” didn’t stop his re-election.

One thought on “OBADO: I respect Raila, but I support Dalmas over Ayacko”