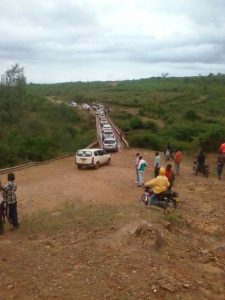 The demonstration procession along the road

Matatu operators plying the Sori, Nyatike routes have protested against the poor state of the road despite paying taxes to both the national and county Governments of Migori.

The operators led by their chairman Jared Jerry Oketch said that the operators will not pay taxes until the roads are well in the best interests of all the road users.

The chairman said that the Nyatike Sub County road networks have been neglected for long by the previous regimes and the current regime and want both the county and the national Governments to maintain the roads failure to which they will not pay taxes at all.

The transporters on the sixty kilometres stretch from Migori town to the lakeside town of Sori beach said that they spend a lot of time and money on the untamarcked road which gives County Government a lot of revenue.

“We spend a lot of time and money as our vehicles get damaged due to the poor state of the roads and we as matatu operators have vowed to continue with the protests until their demands are met by both the national and the county Governments,” he said.

Nyatike Sub County has been having the poorest road network since independent and the residents and the transporters are calling on the area member of parliament Tom Odege and Migori County Governor Okoth Obado to come out and repair the road.

They said Nyatike gives the county a lot of revenue from the lakeside town of Sori that has fishing and tourism potential.