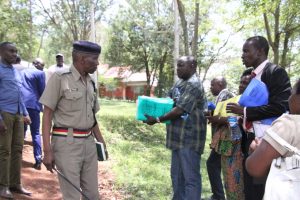 A police officer looks on as MCAs walk away with cheques they had taken from county education office on Wednesday.

Drama ensued today at the Migori   county   education   offices as members of the Migori county assembly   stormed the education offices demanding the release of bursary cheques.

County   Public   Administrator Dominic  Akugo  Dismissed the claims  of favoritism saying   there was delayance in the  release of funds from the national government.

Akugo at the same appealed  to the MCAs  to return the  files  they had  from the  education offices  saying  they   are required  by the relevant  ministry for record purposes.

This  was supported  by the county communication ‘s  Director  Nicholas Anyuor  who said  the county was about  to release  the  cheques  as they were just waiting for  funds .

The MCAs led by the assembly Majority   leader Mallan Ogega   had   earlier   in the day  interrupted assembly proceedings   citing massive corruption at   the executive offices.

READ ALSO: My name is Mercy Boke, I scored 390 in KCPE but can’t join Bunyore Girls. I need bursary

The MCAs   latter marched   to the   education   offices   where they   thronged the   offices   in demand   of the cheques.

Some of the MCAs  who suspected mischief  in the way the matter was being handled  broke open  office cabinets  containing  files  and  cheques , which were reportedly  locked up   by  an insider within the education office  who could  not be reached  on phone.

The MCAs  latter  took off with the  files  to the assembly premises where they swore  to  table a  motion to  impeach the County Executive   Committee  member in charge of education  who was  not in office   during  the  chaos.

The  MCAs  claimed  that there  has been favoritism  and discrimination  in the  issuance  of the bursary  cheques  saying  cronies  of the governor had received   the  cheques  at the beginning of the year.