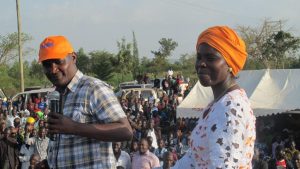 Mbadi said the move will be to safeguard Suba native Zephaia Okeyo Aura who was ignored despite emerging top.

He said they will demand explanation from Kenyatta through courts on why he picked two people from Western region and none from the community.

We need a just treatment of everybody including Aura who was overlooked something we will not leave unchallenged as the Suba community,” he said.

Mbadi questioned why the CEO and Chairman were picked from the same region with the argument of professionalism rather than region when Aura was left based on region.

Earlier a section of Luo MPs said the community was locked out of the nominees which they said was marginalization.
President Uhuru picked 6 nominees from the list of nine that is Roselyne Kwamboka, Abdi Guliye, Paul Kurgat, Boya Molu, Consolata Mucha and Margaret Mwachanya leaving out Samuel Kimeu,Henry Kizito and Zephaia Aura.

The parliament will discuss the names on January 17.