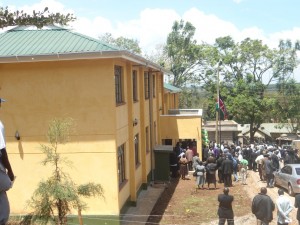 The new court will go a long way to also help parts Narok counties residents after being upgraded from the current Migori Principal Magistrate court.

Previously residents have been forced to get high court services from Kisii, Homa Bay and Kisumu high courts.

Muslims who have been forced  to travel to Kisumu will also get reprieve as the new court will house a Kadhi court which was opened  on October last year.

CJ opened a high court registry which will pave way for the Kisii High Court to have mobile sitting at the court waiting for a high court judge to be posted at the station and the premises to be completed in six months time..

“The opening of the court will be key in building and putting in place better infrastructure to help in giving justice to Kenyans,” Mutunga said.

“The building of courts in the country which were allocated earlier in parliament will help Kenyans in generations to come on their quest to seek justice,” he said.

Similar projects are being carried out in Sirisia, Malindi, Gatundu, Busia, Kisii and Kisumu to help upgrade the existing infrastructures.

The construction started in 2005 and stalled two years to delay its opening in 2011.

The new court will have eight holding cells, a library and exhibit room. It will also have offices for prosecutors and a kadhi.

It will also have four registry and courts for civil, criminal and children courts and five chambers.

Junet Mohammed, the Suna East MP lauded the move by the Judiciary to open the court saying it has been long overdue.

“We have been forced to always rely for justice in Kisii and the new court will make it easier for get justice in murder, appeals and land cases,” he said.

Junet challenged the Judiciary to establish a court in Nyatike sub county which has been getting services from a satellite court in Sori town and a temporarily one at Macalder town which operates once a week.