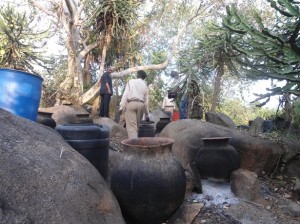 Public Administartion officers at Ngore beach in Nyatike where they impounded over 2000 liters of Kangara which is used to make Changaa.

By Clinton Oballa.
Four suspects were last week arrested as 980 litres of changaa was destroyed during a raid on changaa brewers in Lichota area in the outskirts of Migori town.
The raid was organised by Ngege Assistant Chief Alphonce Aseno and targeted changaa dens which have been blamed for the recent increase in changaa consumption within the region.
During the 5.00pm raid, the assistant chief, in company of some of the area residents caught the brewers by surprise as some of them were going about their normal businesses of selling the brew.
Speaking after the exercise, Aseno thanked the residents for joining in the war against the brews and promised that he will not rest until all those involved in the trade were flushed out of the region.
“We cannot just sit down and let a few people ruin the lives of youths,” he said adding that the brews were also to blame for the increase in crime rate in the region.
He also called on those with information on where the brew could be to provide information to his office so that they can take action and deal with the brewers.
He further urged the youth to get involved in developmental activities that will help improve their social life instead of idling around some wasting in chang’aa dens.
The campaign comes just a week after a man lost his life following the consumption of the brew in one of the local’s homes in the area.
“This is not the first time we are losing someone’s life over alcohol and we can’t keep on watching our people die,” the chief said.