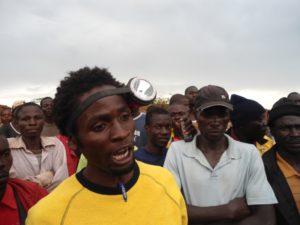 By MN Reporter
Quarry owners in Nyatike Gold mines have been put on the spot as two miners drowned and died at Sindule in Masara on Sunday.

County Minister for Environment and Disaster Management Elijah Odhiambo said quarry owners and miners they hired did not heed to the county government calls to take precautionary measures leading to loss of lives.

Odhiambo said the county government was often met with resistance whenever they visited the gold mines to assess their conditions.

“It is not in order to let people die but when the county government comes here to take statistics on the people here and the conditions of the gold mines, we are met with resistance,” Odhiambo said.

Samuel Ochieng’ a form one student at Got Kachola Secondary School and Peter Otieno from God Kweru met their demise when they entered a dreaded ‘Sindule’ quarry to mine gold.

Sindule had earlier claimed lives of six other people and the county government ordered the miners to halt their activities till the rains are over.

The local community mounted a search for the bodies in the quarries Sunday, but failed forcing them to reach out to the national and county governments with only the county government responding.

Speaking at the accident scene, Otieno’s mother Loida Achieng’ who arrived there Sunday, demanded that the quarry owner produce his son.

“I have already told the owner of this mine, Otieno, that I want my son. He was very young but you took him and brought him here,” she said.

She said she was tired of waiting in the cold, hungry and demanded that she be issued with her son’s body.

But Monica Achieng’ who is Ochieng’s mother thanked the county government for stepping in to help them find their sons.

The two families were issued with ksh. 40,000 each with the rescuers each receiving ksh. 10,000 in addition to food from the County government.