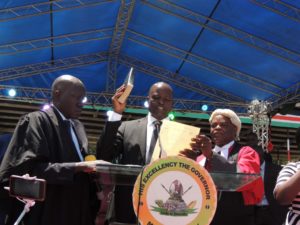 Migori county governor politics are yet to be over after governor Okoth Obado win has been challenged at Kisii High Court.

Ayacko, who lost on Independent ticket wants Obado’s win to be nullified arguing he was not validly elected.

According to court documents Ayacko record ,minutes of interviews and documents concerning recruitment of election officials hired by IEBC availed together with verification, recounting and re-tallying of all votes for all polling stations for governor post.

The detailed petition also the court to avail Forms 32, 32A, 37A, 37B, 37C, access to the IEBC
portal server concerning Migori county among other voting materials.

According to results announced at Migori TTC tallying center, Obado was declared the winner for his second term with 201,369 votes against Ayacko’s 113,673.